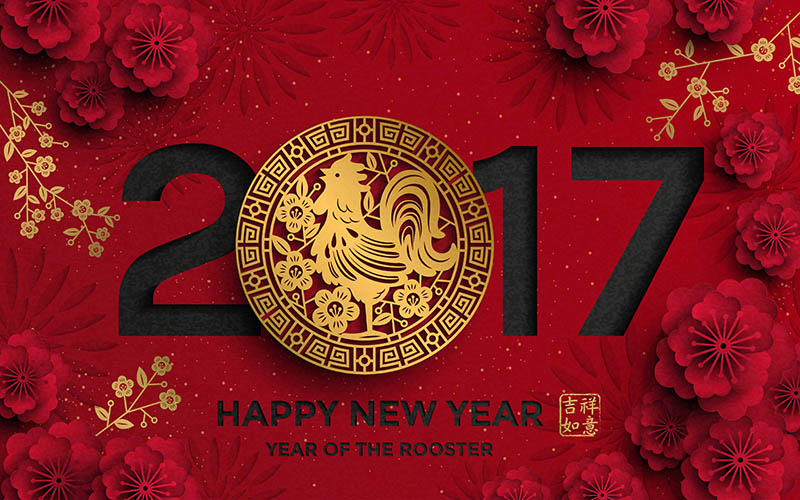 Chinese Year of the Rooster

Last year I wrote a blog on the 5 ways to succeed in business during the year of the Monkey. In that post, I mentioned that the year of the Monkey usually turns out to be a year where anything can happen. Safe to say, I think we can all agree that 2016 lived up to its Monkey name. Between killer clowns, Brexit, virtual reality Pokémon Go, and the US election, 2016 is sure to go down as a year we won’t forget (no matter how hard we might try!).

So, it’s with a sense of relief that we move into the year of the Rooster. The Rooster promises a year of practical solutions and hard work.

What is the Year of the Rooster?

The Chinese calendar is made up of 12 zodiac cycles each represented by an animal and one of the 5 elements; wood, earth, fire, water and metal. This year we will be moving into the year of the fire Rooster. The Rooster is cocky, confident and fearless. However, the fire Rooster is also said to be trustworthy, responsible at work and has excellent time keeping skills. The Chinese New Year is determined by the lunar calendar and falls between the end of January and mid-February. This year, Chinese New Year starts on Saturday 28 January. So, per ancient Chinese wisdom, what might the year of the Rooster have in store for us?

A Year for Work

The Rooster encourages you to be prudent and to save but it’s also said that the year of the Rooster will bring money in unexpected places. When was the last time your reviewed your ISA account or your car insurance? This is the year to look at expenses and see where you can save a bit of money. If you don’t yet have a fund for unexpected emergencies, it’s time to set one up!

Good Things Come to Those Who Stay Organised

You might think that a year of working hard and saving sounds like a boring year. But the year of the Rooster will be anything but a quiet one. The Rooster loves debate and conflict. With cockiness and arrogance in the air, the year of the Rooster will be a year for finger pointing and fault finding. Try to strive for perfection and stand your ground. To succeed with either of those feats make sure you stay organised this year. You won’t reach perfection if can’t even remember to call your prospects back. Maybe this is the year to invest in a new CRM system?

The Rooster is an animal that prefers the company of the opposite sex. Here he can really show off. After all, two Roosters under the same roof is said to make life intolerable. Does this mean that the year of the Rooster will also be the year for women? Well, January’s Women’s March was said to be the largest demonstration in US history. With almost a million participants in the US and almost 2 million attendees worldwide, it’s not too hard to imagine that 2017 will be the year women in business will have their chance to shine.

According to a Report by Professional Service firm EY women are now considered to be the most powerful consumers. Their report states that women are the next emerging market and now drive 70% to 80% of all consumer purchasing, through a combination of both buying power and influence.

So How Will This Affect Your Business in 2017?

Well, it’s been proven that companies that have an even ratio of men and women (as well as an even ratio of people from minority groups) perform better when it comes to company turnover and making good business decisions. 2017 is the year to look over your management team when taking on new hires and make sure that your business is not only representing your customer group but also society at large.

Whether you are a believer of Chinese astrology, or just consider it a bit of fun, the advice given in connection with new Chinese year is usually something we would all do well to take into consideration. Especially a year that promises to bring a lot of questions and uncertainties our way.

I wish you a happy and prosperous Chinese New Year! (gōngxǐ fācái)